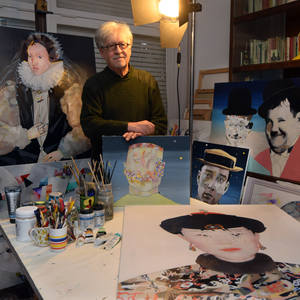 Domenico was the name of my paternal grandfather, Antonio that of my maternal grandfather. When I was born, in order not to do injustice, my parents gave me both. I was born in Castel San Pietro, a small town in the North of Italy. When I was 11, I convinced my parents to gift me not the usual pastels, but a box of oil colors. I studied in Rome, at La Sapienza University, where I graduated in History of Modern Art. In the practice of painting and drawing I am self-taught. During university I started working as a scenographer in some movies: “Finchè dura la tempesta”, by Bruno Vailati, when I created the interior of a submarine in a pose theater and “Italiani brava gente” by Beppe de Santis, drawing tanks and cannons of the II world war. Then I participated in a series of television documentaries, making huge realistic three-dimensionals geographic models, with mountains, rivers and marine depths. In 1968 I began to work as an illustrator in the monthly magazine "L' Automobile", for which I also wrote some articles and made photo shoots. So photography also became a job for me. In 1971 I entered the Team photo agency, collaborating with Italian and foreign newspapers. During this period I also worked as a teacher in graphics and photography courses aimed at cultural operators. My first participation in a painting exhibition was in 1975, with some drawings in a collective entitled "The sign of man". In 1976 I founded, with some colleagues, the A.G.F. which is still one of the best Italian photo agencies. Since then, painting and photography have always intertwined in my life. Having made reportages from many countries in Middle East, Asia, Africa, America and Europe, I felt that painting means traveling in space and time: distant lands, under a sky that evokes day and night toghether. Cities with towers, spiers and domes with bright colors, above which opens a cosmos crossed by stars, planets, galaxies. Traveling means also meeting characters I love and who are in everyone's memory, writers, poets, leaders, artists, movie stars, such as Charles Baudelaire, Antoine de Saint-Exupery, Joan of Arc, Wassily Kandinskij, Marlene Dietrich, Buster Keaton, Amedeo Modigliani, Sitting Bull, Edgard Allan Poe. Then there are also imaginary characters, women and men. An imaginary ship, the Queen Lucretia, sails the oceans, engaged in various trades, not always legal. I began to imagine his crew, people embarked in all the harbours of the world, who speak different languages or, perhaps, do not speak at all. A series of paintings, which I called Sinbad's Travels, are inspired by the daring sailor of the Arabian Nights. Adventurous peregrinations, in which Sinbad lands in unknown and surprising countries, encounters all sorts of dangers, faces absurd and paradoxical situations. He is always able to return to his homeland, Baghdad, to enjoy the accumulated wealth. But, after some time he cannot resist the desire to leave again. My works have been purchased by collectors in Italy, USA, France, Montecarlo, Greece, Australia, Hong Kong, Taiwan, Germany, Saudi Arabia, Canada.
I have never stopped writing, often adding text to photographs. I also published, in 2000, “Cronache del basso Nilo”, a novel set in Egypt during the Napoleonic campaign, in 2003, “La collina delle sabbie che corrono”, a collection of Afghan legends and, in 2018, as an e-book, “La Vittoria del male”, forty-nine short stories starring Daphne, an extremely evil cow. In 2017 I participated in the conception and organization, at Macro Testaccio Museum in Rome, of an exibition of paintings of psychiatric patients, entitled "Arte senza Pietà".

For me canvas is a place of meditation and construction, of immersion in the past and of projection in the future. I have a boundless faith in the color, a color clean and bright. I like to move on the border between figuration and abstraction. I would like to get both, turning the sensible forms - men, animals buildings, skies and countries - into perfectly abstract painting.