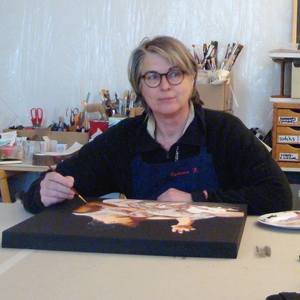 Artistic approach
Most of my work revolves around the representation of the human body, through anamorphoses, metamorphoses, drawing on the Baroque style, the genius of the Renaissance or contemporaneity.
One line may conceal another, appear, disappear, make the invisible… visible

2017: « Anamorphosis cube » Realization of an anamorphic effect for a perspective cube layout created by the Vessel in the Logi'hic room - STRASBOURG.

2010 "Sun Through courage", acquired by the city of LINGOLSHEIM, as part of the renovation of the Wedding Hall of the City Hall. (F)


2009 "Anamorphosis-09" - Pictorial intervention on the glass facade of the outward hall of the Regional Council of Alsace in Strasbourg, as part of the exhibition "Atout Coeur" organized by Villla-Rhéna association (F).

2009 "Reach yourself", artistic arrangement on the stainless steel passageway to the the Chamber of Trades of Alsace, for its 110th anniversary, SCHILTIGHEIM (F)

2007 "Kunst am Bau", artistic arrangement of public area for the expansion of a High School specified in high level sports : "Otto-Hahn Gymnasium" at Karlsruhe (D)