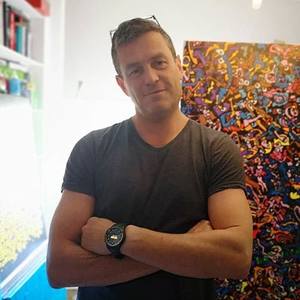 B. in 1970, FROB has always drawn on notebooks corners. During his law school, he escaped benches of the faculty crunching his similar, also inspired by his exciting and vibrant teachers' long litanies. He now works as an independent on the day and then at night, insomniac, he draws and paints. He loves coffee. He also loves comics and it is visible in his compositions with broad black lines. Initially focused on portraits, FROB now operates on a form of naive, raw, figurative free (at least that's what his knowledged relatives told him). He likes to have a big black felt pen in the pocket and acrylic tubes and pots never too far (except during the day because he works). He learns discovering, constantly experimenting. New and curious phenomenon : when he has not been painting for 2 days, he has a left hand little tremor.