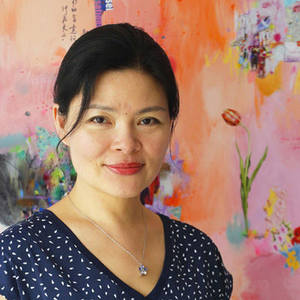 In her paintings Xiaoyang seeks to bring together the East and West. Her technique, often mixed, acrylic, oil, collage and plant tissues, can give an impression of patching. This effect, seem far from inconsistent or incongruous touch in its simplicity. The artist is not afraid to mix colors and honeyed acids. She also uses writing: Chinese, French and English characters, frequently used words in the Holy Bible.

“There is so much darkness and sorrow in this world, I no longer want to paint the dark side. I would like my art to be a tribute to the beauty of this world… I want it to be heart warming for all people… a message of peace and love…”

“For me, life is a journey with a purpose, art is a game with meaning. “

The artist expresses artistically the sole hope of being able to transmit a message of peace and love. Her gift is to magnify what is essential in life.

Xiaoyang Galas’ artwork is held in private and public collections all over the world.