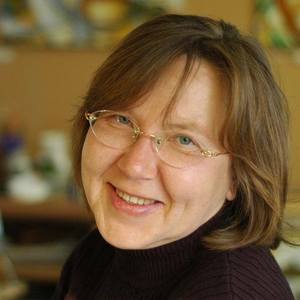 I was born and raised in Russia, and studied Museology, including History and Culture of Art, in Moscow. For 14 years I worked with archaeology researchers, creating technical illustrations for publication. Following a move to the US I began artistic oil painting in 1999.

My art is a way to communicate. I use color, energy, and movement to connect emotionally to the viewer. I often paint with a sense of nostalgia, both personally and more broadly.
I primarily paint with oils on canvas because it allows changes during the creative process. At times, I'll see a different, better image while I paint.
I like to use a palette knife in addition to traditional brushes. I also work with acrylics on canvas and paper, and drawings on paper using ink, charcoal, and chalky artist crayons.
I would describe my style as semi-abstract. My subjects remain recognizable, but I bend perspective and distance to add energy and motion.