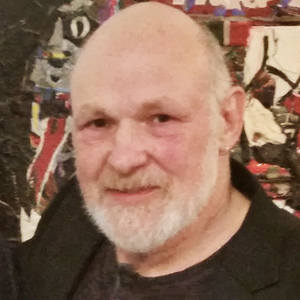 An Artists Artist, Master Abstract Expressionist George Schulman standalone work took a lifetime of battles to finally once again achieve his well-deserved success.
Schulman comes from generations of creatives including his second mother Freda Diamond the Martha Stewart of the 50’s.
At 23, he was an active member of the New York 1980’s Art Scene historically its most creative era. Showing on Madison Avenue and managing Jamie Canvas in SoHo Art Supplier to Artists and Stars, he advised, befriended and mentored Art Icons including a not yet discovered, Michel Basquiat. Listening to Schulman’s stories, it is easy to lose oneself as he shares studio visits and adventures with Art Icons of 20th Century, including his lifelong friend the revered Knox Martin, who at 94 still teaches to sold out classes at the New York Arts Students League.
Unable to afford Yale, married too young, desperate to keep his family far away from street gang and thugs of a changed Bronx, Schulman used his art sales to move his family to the Huntington Long Island. Family responsibilities forced Schulman out of the scene. Even though he stood shoulder to shoulder with his contemporaries Schulman convinced himself it was not his time.
Opening Schulman Customer Stretchers, Schulman taught for a decade at the Huntington Art League. Not having enough volume to support the business, Schulman’s luck would change when Home Depot closed its luxury Chain giving Schulman a large payout and pension finally affording him time and money to paint full time.
It was at the Vermont Studio where Schulman became a fellow, that he would finally have the space and accolades from a community of visiting artists from all over the world and genres. After years of experimentation, his lifelong quest to stretch his and the boundaries of art, Schulman is back to market with a vengeance and enjoying the accolades from fellow artists, gallerists and buyers.
Voted Top 80 Artist Art Miami Week 2016 by Artsy.net, Schulman’s Paintings and Collages some painted with 24kt gold, tell stories of love, disappointment and despair, exuberance and values, false security, escapes to Artist Retreats, Sedona Arizona desert clay, the Grand (decaying) Bronx Concourse streets, Athletic prowess, innocence, untimely death, family illness, disappointments and rebirth.
“I love to paint. To understand anything, you must live with it, you must observe it you must know all its content its nature its structure its movement. One of the most difficult things in the world is to look at anything simply. In the end, it’s a lifelong process, so you need innocence, humility and courage”. George Schulman

The twists and turns, ins and outs of the picture plane, Schulman’s exaggerated forms, colors and textures takes his viewers on a crazy ride. Not unlike the Synthetic Cubism of Picasso, Willem de Kooning, the impressionist painters Seurat and Van Gogh and lifelong friend, teacher and mentor Artist Knox Martin, whose own work transformed through the works of his elders’ the Action Painters, though they exist in flattened spaces. Schulman’s work is far from flat.
Schulman’s Paintings are emotionally explosive linear dances on twisting whirlwinds in the unexpected palettes. Underlying everything is a Golden Section of grid work, establishing a foundation of mathematical or proportional harmonies much like music chords. Shapes and patterns sometimes appear to be a spider like web of strings or a lathe of dots traveling the grid, like snowflakes arriving to start their own patterned loam. Other times, colorful wefts and warps thrown like patchwork quilts with their colliding areas of fabric patterns moving in cross current tides, fanning in and out in all different directions.

“As I paint, I am constantly examining things. I paint in strokes (touches), but I see in patches. I also use grid systems. There is something programmatic within. As shapes occur, I look for their rightness, their harmony. Color creates its own sensation", Artist George Schulman