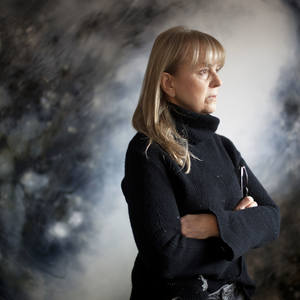 "Art is longing. You never arrive but you keep going in the hope that you will." Anselm Kiefer.

Gina Parr is a widely collected Artist who works predominantly in the medium of painting, but also photographs when travelling, her way of painting whilst on the move.
The image of the sea and the Artist’s thoughts about memory and identity are ever present in her work. Her childhood, spent diversely in wide-open spaces, fishing for Mackerel with her father, and her mother with her hoarding and mental health issues defined the Artist’s relationship to the sea and land, the uncertainty of the deep, the spirit and memory of the open space, evoking freedom and connectedness. She does not wish to recreate those experienced places, but to unearth the truth, to centralise the feelings and emotions that were and are present, to not be afraid of the material of her past. The Artist’s work is an expression of the intermingling of both joy and pain: the human condition.
When painting, she is completely immersed in the process, building a reverberating relationship with the canvas, a push and pull of spontaneity and controlled intention. She employs palette knife, cloth, brush, sponge and fingers, to add, remove, scratch, blur and work the paint, often drawing into the paint with charcoal, whilst aiming to evoke an atmosphere drawn from the process, the emotional trigger and the colour palette employed.

Originally trained as a Fine Artist, graduating with a First Class BA Honours Degree, she went on to Chelsea College of Art to study Set Design, leading to a 25 year career Production Designing a multitude of sets and stages for the likes of David Bowie, Kylie, Robbie Williams, “Shooting Stars” with Vic and Bob and the original Albert Square for “Eastenders”. She has Art Directed for Richard Eyres on "Insurance Man", the Alan Bennett Drama for BBC, has had work featured on set of David Hares “Worricker” for BBC, “Breeders” starring Martin Freeman and Alun Armstrong for Sky 1 and “ This Way Up” for Channel 4. She returned to work as an Artist in 2007, bringing her creative experience as a designer to her Art practice.
She has also lectured in art and design in various colleges including Chelsea College of Art and Nottingham University, has exhibited in galleries and art fairs in the UK, Denmark and Italy, the Society of Women Artists, of which she is an Associate member, and has completed commissions in The Middle East, Belgium and London.
Her works are held in collections Worldwide including Keble College Oxford, Director of Jestico + Whiles Architects London, President of the Boston's Children's Museum USA, Senior Economist Goldman Sachs, Argentex and Vedanta Headquarters in London, to name but a few.

She now lives and works between Devon and London’s East End.

2021 - Photographs and Paintings on set of "Breeders" series 2 SKY.