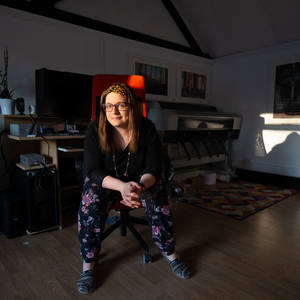 At the heart of my photography is a preoccupation with abandoned structures and locations. Traveling widely to undisclosed sites throughout Europe, I explore the boundaries of beauty, decay, nostalgia and neglect. The genesis of each of my pieces is often the unique architectural character of each location, heightened by their painfully slow transformation after years of abandonment.

"​Rather than taking a documentary approach, Soden breathes a sense of life into the scenes, hinting at narrative with studied compositions. Characteristically each image has a distinctly painterly aesthetic, side stepping the tendency that photography has for observational and distanced looking. Soden’s approach is lyrical and directs the viewer to explore the concepts of time and memory. The compositions feature derelict asylums, long since closed schools, ex-military compounds and famous city power stations in various stages of decay. The results are striking and poignant, at once both edgy in their contemporary aesthetic and nostalgic in their ruinous beauty.

The work is underscored by the potential controversy of gaining unlicensed access to the out of bounds areas. Every image is a product of a journey, referring both to the physical demands of gaining entry and to the passing of time which is evident in the abandoned locations. Like the Romantic poets before her, Soden offers room to reflect on more romantic notions of beauty and a sense of calmness despite collapse and structural devastation"

Watch A Video About Gina Soden