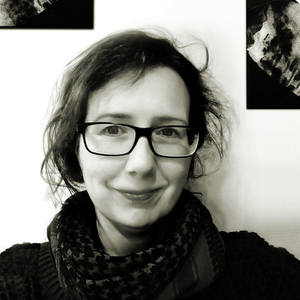 As a geographer I ask questions and like to zoom in and out at the world and all its wonders.
From microscopic detailed to interplanetary big.
I look at a stone and wonder how it's formed, what it has been through, what is has 'seen' and where it will end.
I look at a fossil of a mammoth bone and wonder what kind of character the owner would've had. Was she loved or maybe aggressive? Even depressed?
The ever returning questions both in art as in geography are: What? Where? Why there?
Questions are most important, so is doubt.

Born in 1974, in a composed family. From an early age on, I was interested nearly everything (like dinosaurs and ancient Egyptians) and I loved to go to the library where I devoured many picture books.
The power that came from this was magical. My absolute favourite was Dr.Seuss. Because of this I could already read before I was in primary school. Later on I wanted to be Indiana Jones, I loved watching (those) movies!

Besides my geographical view on things, I'm inspired by the drama and melancholy of life itself, the beauty in both science and nature and the tension between these two worlds that sometimes can be surprisingly alike.

Besides my interest in science and art I have a deep love for history. Because I am a direct descendant of early Danish Viking settlers here in the Netherlands (Deenen means from Danish descent), I feel very connected with this culture.
Opposite of what is common thought, studies show that Vikings were very open minded and mingled with other cultures.
They were very creative and believed in justice and (a form of) democracy.

Mostly my work is 2D (drawing, photography, painting, digital-art), sometimes 3D (all kinds of materials), sometimes both. It's just what the story needs at that time.

I like to hear and see stories, about people, things, movement, everything can be a story. Told by journalists, writers, painters, musicians, but also by people on the train or at the bakery.

Those who look see a lot, those who can also listen see even more.

I live and work with my guy, two kids and a red cat
in Rijen, The Netherlands.


You can find out more about me at: https://www.gondadeenen.com