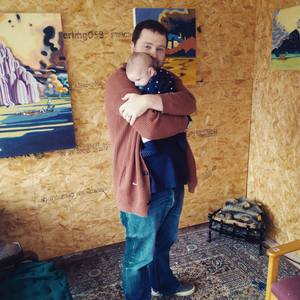 Having graduated from Liverpool’s School of Art and Design with a degree in Fine Art, Henry has exhibited work throughout the UK and had work published in print and online. Most of the subjects he selects are from reality, but are open to what imagination and paint can achieve in creating a sense of place.

Natural elements like trees or clouds are opportunities to push the limits of colour, form and light, with people and buildings being nestled amongst them. The intention is to skew the reality slightly, just like visiting a familiar place in a dream. Based in Merseyside, UK, he will often draw inspiration from the people and places that are rooted in England’s North West.

Henry’s painting are attempts to create new worlds for the viewer to occupy. Having always imagined himself exploring paintings as a boy, he hopes to give the people the same opportunity in his work.

8 DAYS A WEEK, December 2008, residency at The Bluecoat, Liverpool.

LIGHT NIGHT, June 2014, talk and presentation ‘Anything but Art’, The Royal Standard, Liverpool.

PAINT LIKE YOU MEAN IT, May 2014, Shortlisted in competition, Interview Room 11, Edinburgh.

MUSEUM OF COLOUR May 2018, Goodstock, Manchester