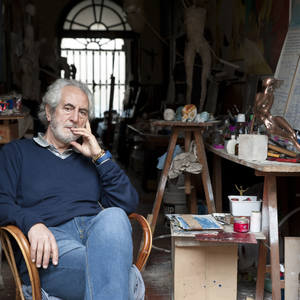 Roberto Renai was born in the province of Siena (Tuscany). To continue his studies he moved first to Lucca and then to Arezzo, to finally arrive in Florence in 1967.
It is in Florence, during the university period that assiduously frequenting the major city museums (the Uffizi Gallery, the Bargello National Museum and the Accademia Gallery) deepens his artistic career, and is involved emotionally in the study and analysis of most important works of the Renaissance.
It was during the Florentine studies that he felt further urged to follow his inclination for art with the participation in various collective exhibitions from which he emerged confirmed also with prizes and reviews.

Self-taught, after a first figurative path, in 1989 he left his job in the bank to devote himself to free profession and, thus, have more time at his disposal to be able to address, both in painting and sculpture, research and experimentation with new languages technical and artistic, in the subject and in the sign .
His painting seeks the contamination of materials as components of acrylics, oils and mix-media on wooden bases and particular canvases that contribute to characterize the shapes more for an almost tactile visual rendering of the weaving and with the intention of making it functional to a greater evidence for the observation of shades, light and colors. Of a work it is interesting not only to reconstruct its legibility but also what is not readable, and its observation must open the viewer to questions and sensations.
Sensations that Renai perceives and fully collects in the colors of Van Gogh's works that expose and describe a creation and a representation of the artist's inner self. Other artists who have influenced him even more in the search for the current moment are the artists who, with their work, have determined to develop a new aesthetic sense immediately after the war that can be identified mainly in Rothko with the bright color spaces of his works and Pollock with his testimony of material power and vitality of pure colors.

The color in Renai's works defines open spaces, looking for the impact of personal and inner impressions; it is the color that entrusts the search for expression not only of definite and legible forms, but also of a perception of silence.
In these years he worked very hard for a purpose: the search for his spiritual world: art was the only means to get in touch with himself, something that goes beyond the construction of the work.
Equally in his sculptures is the sense of lightness and the inner dynamism of the research structure. Its artists "trainers" are many starting from the archaic ancestry dating back to the ancient Etruscans; It is a famous work of the Etruscan period called "the shadow of the evening" to have particularly impressed and influenced its elegance and essentiality and it is in that direction that its work is still oriented. In sculpture, volumes - weight and a search for harmony - contrast with suddenly vertical lines; a continuous and constant juxtaposition to which selected materials contribute, ranging from precious silver, bronze, copper, terracotta and fiberglass.

In fact, in sculpture there is a constant search for contrast between the parts due to the expressive opposition also of different materials that determine a communicative impact and a perceptual sensation of verticality.
Exposes from 1971 in Italy and in the United States of America. Some of his works are present in private collections in Italy and in North America.
For some time now, together with other Florentine artists, he has formed a working group called KPK (Kantiere Post Kontemporaneo), engaged in the search for expressive forms of a conceptual nature with installations and performances on the Tuscan territory.
He is taking care of the preparation to set up exhibitions abroad.