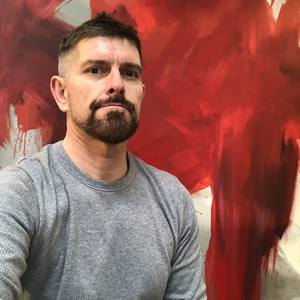 In a world preoccupied with technology, there is something remarkable about painting. It connects us back to man’s earliest and most elemental forms of self expression.

I am not interested in painting something that already exists. My pressing urge is to use paint to explore new forms which will ultimately carry emotional weight. I try not to recreate an image. Instead, I may use it as a reference point by which to move from one painting to the next.

I am influenced by the Abstract Expressionists - for their emotional rawness and mark making, and also by the Renaissance - for composition, light and movement. Onto these I layer influences from contemporary culture and my own personal experience. I aim to instil a classical feel into my work whilst finding new visual paths, with the result hopefully being an exploration of the purpose of painting itself.

I think of my paintings as posing a series of questions rather than providing overt statements or narrative pointers towards any clear kind of answer. There would be no joy or satisfaction in doing that. Instead, the process is more about showing my search for something which, maybe, I hope I’ll never find.

2018 March The Other Art Fair, London

2016 March 'All is more is nothing' Solo show, Screaming Gander Contemporary Art, Manchester

2015 May 'The Open West' The Wilson Art Gallery, Cheltenham

2015 May 'The destruction of anything famliar' Screaming Gander, Manchester