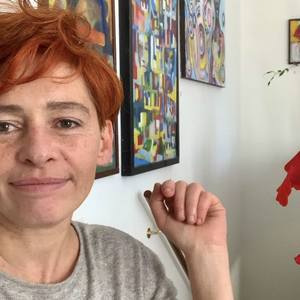 My works represent my artistic and inner evolution. My research is in constant experimentation and is not attached to a particular subject, technique or material. My creativity is in continuous expansion, which occurs both outward and inward, to the expressive research that manifest in a work corresponds an inner search that leads to greater self-knowledge. But most of all the initial input is always the inspiration, my only boss.

March 6 2010: first event of the Theatre Festival organized by the Municipality of Cassinetta di Lugagnano (Milan - Italy): "The Magic of the Rainbow. Sounds and Visions of a colorful world". A show by Luz Amparo Osorio and Ilaria Berenice, live music and live painting.

June 8 2010 at the Galleria Arsitalica in Milan (Italy) event "The Magic of the Rainbow. Sounds and visions of a colorful world." A performance of Luz Amparo Osorio and Ilaria Berenice,live music and live painting.

March 8 2010 was published the manual "Knowing that you have rights" freely distributed nationally (Italy) in 2000 copies, published by SDL intercategoriale, with on the cover and inside pages the reproductions of my paintings of the series "Women".

On January 29 2009 I went on TV on Sky Uno's invitation to make a performance of live painting during a broadcast led by Natasha Stefanenko. At the request of Sky Uno in the studio were brought my paintings from the series "Light and Colour" to reproduce the atmosphere of my studio.

July 2009 Live Painting during the event "The Night Is Young" organized by the Association Quinto Livello at Somma Lombardo (VA - Italy).

I Illustrated The book “Beyond any reasonable doubt” written by Francesco Tufano (ex President of European Railworkers Association) and published by CSA Editor (Italy), 2008.

2008 Guest as painter at the Radio lupo solitario for an Art broadcast, invited by Quinto livello Association.

2007 May: artist of the month on the website youart.org of the "Carta e matita" Group, finalist Enterprise and Culture 2007.

Publication of a painting reproducing Fontana Square (Milan) on the “Milanese Calendar 2007” issued with the magazine “Zona Milano”.