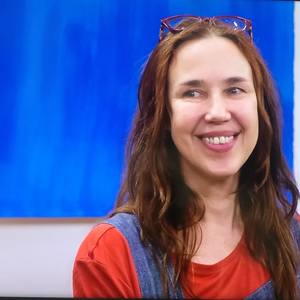 I am a figurative oil painter with work in collections throughout South Africa as well as in Chile, Germany and the United Kingdom. I am originally from Cape Town, South Africa - where I Completed a Fine Art Honours Degree and have been painting professionally since 1999 after many years working as a cabinet maker, running my own design and manufacturing business.

After three successful solo shows and regular participation in group shows, competitions and art events, I moved to the United Kingdom with My family in 2009. I have taken part in various group shows in Berkshire while creating a body of work for my first solo show in England.

In 2016 I was chosen to participate in Sky Portrait Artist of the Year, which aired in spring 2017 on Sky Arts. I entered again in 2019 and went quite a bit further than the first heat - this will air in 2020 on Sky and Channel 4.

I continue to exhibit in Open Studio/Arts Trail events and groups, and although these events are wonderful in terms of local exposure and a valuable and encouraging way to engage with the public about my painting, I am hoping to be accepted into an appropriate gallery with a wider audience.

Sky Arts PORTRAIT ARTIST OF THE YEAR 2020: Currently airing on Sky and YouTube - Winner of Episode 3; watch the semi-finals on March 17 2020.

March – May 2019: SKY ARTS Portrait Artist of the Year 2020 – Winning First Round; Finalist in Semi Final and goes through to the Finals at the National Portrait Gallery.

Easter 2019: Cookham Stations of the Cross.

May 2016: Participated in SKY ARTS Portrait Artist of the Year – one of 3 finalists in the heat. Broadcast, along with exhibition at the Wallace Collection: March / April 2017.

November 2010: Exhibitor– Maidenhead ART ON THE STREET.
GAP IN CV: TOOK TIME OUT TO HAVE A CHILD AND RESETTLE IN THE U.K. WITH FAMILY
March 2005: Solo Exhibition – Association for Visual Arts, Cape Town