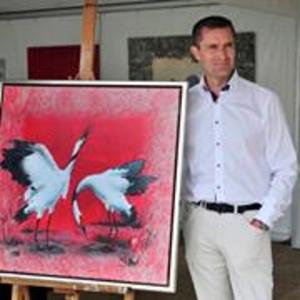 A short overview of the art of Ingo Leth, Emmen, Netherlands
This key note has influenced me for my whole life. I was born in 1968 in Duisburg/Germany. As I attended
the school for Graphic Design and Color Techniques I realized the impact and possibilities of art.
In 1992, after moving to the Netherlands, my career as an professional artist began with first exhibitions.
As a Co-founder of a new art style I worked until the year 1999 in an artist group which got attention at
home and abroad.
In 2000 I advanced my art style. I have tried different styles of painting with different techniques. Now my
work has developed to a combination of abstract with figurative.
Especially I obtain for my art a lot of my inspiration out of Japanese and Dutch culture. The first steps to
Japanese culture began with a hobby. Since 16 years I raise koi-carps. Many books about and a trip to
Japan in 2008 inspired me for my paintings.
In my paintings I try to express cultural symbols and their story and meaning behind it. For everyone
it could be a discovery trip to an unknown art world. The painting style I use is often west-European,
thoughts and symbolism can be traced back to the Japanese culture.
Sources of inspiration are the Haiku (poem) writer Basho, the Japanese archery Kyudo, Maiko and geisha,
Kanji signs und Origami art. But there are links to the Dutch culture, too. Some of my paintings are
influenced by the traditional Japanese Arita porcelain and its blue color and the similar Dutch "Delft blue".
www.ingoleth.nl