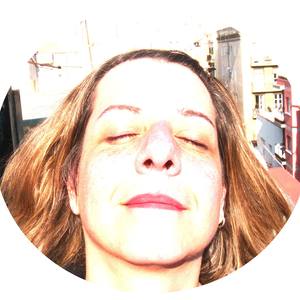 Ever since I was able to hold a pencil properly I have devoted myself to transcribing life around me into graphics. My father was a builder and contributed greatly to my grasping drawing lines and understanding technical plans. His architectural studio was to be my first workshop where thought was tantamount with drawing. Creative help was at hand, too, from my grandmother Megar, who had a degree in Fine Arts and managed the Jaimes Art Gallery in Paseo de Gracia in Barcelona. I helped her to hang exhibitions and also, she took me along to visit antiquarians related to her business as an art merchant, thus acquiring a solid bagagge of names, styles and manifestos. My vision of that world enlarged thanks to our talks about the masters, the art scene and reproduction techniques.

At the end of the 70s I spent my summers in Breda, Gerona, at J.Puiggali's, my grandfather, lending a hand in his museum-shop "BredArt" which housed the most relevant pieces of popular Spanish ceramics, Catalan antiques and other art works. During the 80s my family joined the Grupo Z publishing team. In the afternoons, this gave me access to the rooms where the artwork for their publications was being done. At the time I spent my evenings attending fashion parades, plays, concerts and comic presentations. In the early 90s I studied illustration and design at the Andorra la Vella Art School and painting techniques in Sant Julia de Loria. In 1994 I enrolled at the Escuela de Artes y Oficios in Llotja Avinyo, Barcelona. It was then when I discovered my path, when one book took me to another in my constant search around the libraries: Biblioteca Nacional de Cataluña, in Hospital Street, Barcelona, and in Andorra, both at Sant Julià de Loria and the Government library.

In 1991 I begun a series of notebooks, engravings and original drawings about human faces and daily situations. My intellectual process is now conformed by a kind of laboratory of expression where colour, paintbrushes and paper are vital. I have turned my own social life into an introspective analysis of my personal experience. Summers of 1994 and 1995 were spent at the workshop of master calcographer Manel Viusa, where I studied new and classical techniques.

"Pequeños Anuncios", a series of visual poetry is born. It is my work in progress, a step by step metamorphose which ended up as an installation at the Barcelona Metronom having previously been presented with Joan Brossa in Cornella. Within the same conceptual frame, "Poemas Electricos" and the work in progress "Anuncios Sociales" were also born. Between 1997 and 2001 I investigated pictorial hiperrealism on images of "Pequeños Museos", a series for specific venues. Concomitantly I joined the G.T.S. collective where I investigated at a professional level. The task envolved overseas commitments related to research, creation and curating experimental music up to the year 2007. I organised over 1000 shows, among which hundreds were my own creation, in Europe, India and America as well as promoting my own records, projects and compilations.

In 2014 I decide to devote my entire time to fine art and ever since my visual creation has consistently been in touch with a rather more mature attitude of meditative abstraction, with what lies within, as a result of many years of constant work which is still ongoing.