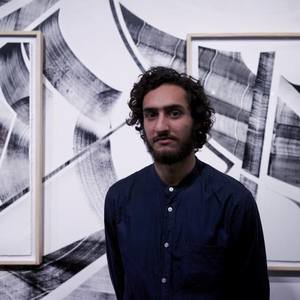 Based in St. Louis, MO, process driven artist, Jacob Elior Berkowitz held his first exhibition displaying abstract minimalist photography. Continuing his study of composition he began to explore motion, creating documentary shorts of artists processes. As he found harmonies between the simple and the complex, the loose and the controlled, the potent and the soft, his working style began to take shape. In 2012 he became a member of The Screwed Arts Collective, who create large-scale mixed media improvisational collaborations. Primarily documenting their works to start, sharing their values of spontaneity and transparency he began to move fluidly within the collective, exploring different mediums and roles.

Soon abstract painting became Berkowitz’s foremost focus. The medium allowed for heavier failures and larger discoveries as he no longer felt limited by the external and looked further inward. A fuller part of himself was able to play a role in the work through its gestural qualities. As the visual language of the work developed, his interest in finding a balance between intuition and reflection translated physically to his process of gesture and constraint. Thriving in unfamiliar territory, he is informed by the contrasts of scale, context, and vulnerability drawn through a balance of studio work and site-specific murals and installations. Within that adaptation the works shifts, the vocabulary expands, and the process is ever revelatory.