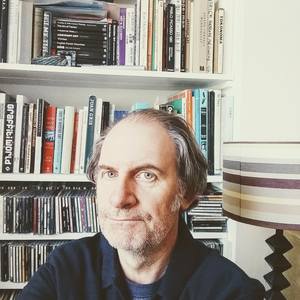 Sometime ago I found an old book from the Pelican series about architecture and was fascinated by the pictures in it, I also found another about grasses from the same series. I liked the contrast between the architectural photography and the simple line drawings of the grasses. I pulled some of the pages out, pasted them together and painted on them. Since then my work has been about collecting and combining old pictures to give them new meaning.
After works have been pasted down for weeks or months I will return, soak them and and peel off some of the layers to allow reworking. As time has gone by I have realised what's the rush? So some pieces can be set aside for months or even years while I savour the working process.
Artists who have influenced me include Joseph Cornell, Hannah Hoch and Francis Bacon.
I was born just outside Southampton in 1965 and raised in the city. I studied at Winchester School of Art, Gwent College of Higher Education and Chelsea College of Art and Design. Now I'm based in Oxford where I work with vulnerable adults in my local community. Since my children were born I've been quite focused on family life and haven't set much time aside for exhibiting my artwork though continuing to be creative is very important to me.