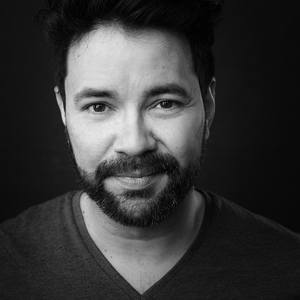 Jamie Zubairi was born in 1972 in Aldershot and raised in Kuala Lumpur until he was 16. He has studied watercolour painting under David Sum in Kuala Lumpur and oils and acrylics under Andrew Burkitt. Graduated from Leicester DeMontfort University in 1992 after taking a Foundation Course there, to take up acting training at LAMDA.

My visual work is often responsive to stimuli, whether it's a painting, a poem, a performance, or a perceived situation. In order that these stimuli are responded to in a state of freedom, I don't limit my responses to purely visual. Within this response I will move, improvise spoken word poetry, play music and paint. These paintings are the visual record of these sessions. These are sometimes live performances, sometimes video art, rendered down to a practice I call my 'Small Epics'