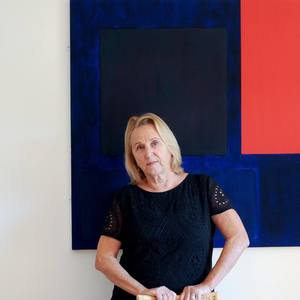 Jane was born in Hampshire, UK and currently lives in South West London.

She worked in publishing (Thomson Publications) and advertising (J.W. Thompson) before pursuing an art education in the 1990s. She then developed her studio practice in London and, for many years, in Barcelona.

Jane moves fluidly across different mediums—photography, film, installation, sculpture and painting. Since 2010, painting and sculpture have become her primary occupation.

She has exhibited extensively across Europe (see below) and was selected to exhibit at the British Brazilian Cultural Centre in Sao Paulo, Brazil (2004) with a sculptural installation piece. Her work is included in both corporate and private collections.

Jane is represented by The Lisa Norris Gallery and Jaggedart Gallery in London. She works from Delta House Studios (Wimbledon SW17 OBA).

Jane is a conceptual artist. Her work is urban-based and future-led, rooted firmly in the traditions of 20th Century abstraction.

Her aim is not to lecture or dictate, but probe, inspire and stimulate, for the spectator to see something different each time they look at a canvas, ultimately sharing in her joy of creativity.

Jane's palette is restricted to mainly three hues of blue. This has led to a tantalising range of colours and has become the pulse of her paintings. Blue is timeless, full of contradictions. It is historically the colour of royalty and nobility, the Virgin Mary, cops, pornography, and melancholy. It’s the colour of the sea and sky, of deep shadow, and cold bruised skin; the denim of cowboys, and the “Mao suit” of Chinese peasants. It is the colour of heaven, an open door to the soul, an infinite possibility becoming tangible. Blue bursts with energy. It asserts itself in our emotions. Its joyousness is capable of lifting our lives to another level.

Jane uses mathematics to achieve compositional harmony. She creates new forms, planes, shapes and colour out of a logical system of spatial calculations; different colour compositions allow her to attain a variety of seemingly simple but complex paintings.

Jane is concerned with form rather than literal representation, taking inspiration from daily observations of urban life: the grids of the streets and contemporary architecture and how the light reflects off glass, steel and water. The mathematical variables are the frames within which she works and makes sense of the urban world.

This verse from T. S. Elliot’s “The Hollow Men” sums up her emotions whilst working on these paintings:
“Between the conception
And the creation
Between the emotion
And the response
Falls the Shadow”

She draws the design of a chair on canvas, then sews a clear outline with black thread before applying acrylic paint.

Many chairs, though often overlooked, have extraordinary sculptural and artistic qualities as well as perceived personalities that Jane wishes to highlight and celebrate in these paintings.

Chairs symbolise authority, power, identity and domesticity. Jane designs sculptures that fuse chairs with the human form, creating soft, sensual and highly visual pieces of art. She trained as a fashion designer and uses her skills in fabric cutting and sewing (she is also a fully trained upholsterer) to create forms that teeter on the edge of surrealism. She feels this is strictly female territory, explored before by Louise Bourgeois and Meret Oppenheim, and female members of the Surrealist movement (1930-1940). The use of hard and soft materials together intrigues her, and seems an empowering and poignant way to explore female sexuality through sculpture.

“Animalism leaps to the fore with these ravishing and sexy sculptures in a three dimensional visual shock Magritte would have been mightily proud of." - James Malpas Sotheby's Institute.

'NOTHING IS AS IT SHOULD BE'
Tassili Gallery (Solo exhibition) July 2014
Palamos, Catalunia, Spain