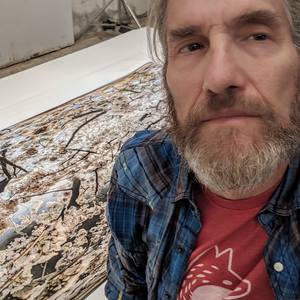 I’m always looking for ways to see things in a new way. From medium format black and white back in the day to abstracted still-life images of food to close-ups of people in the studio I love to explore ways to engage with and interpret the world through photography. Take my two latest projects as an examples:

First, I have been creating a series of pictures using the Google Photo Sphere/Street View app in a way it's never been used before. The final images are disassembled and reconstructed 360° scenes that I create by subverting my phone’s camera and software to playfully bend space and time to create abstracted views that reinterpret reality and are filled with a dizzying sense of wonder and mystery.

My most recent work is the #insta_stack_art project. Currently, a torrent of 95 million images are uploaded to Instagram every day. The #insta_stack_art project is a conceptual photographic art project about that staggering level of image overload and repetition. Each of the images in this body of work is an x-ray stack of Instagram images overlaid to create a new work of art that looks at our relationship to photographic media in the digital age.

I live and work in Arlington, VA and my work has been featured in numerous solo and group exhibitions in the US and abroad. I have also been the recipient of several grants including an Aaron Siskind Foundation Individual Photographer's Fellowship, a Virginia Museum of Fine Arts Individual Fellowship, and a Franz and Virginia Bader Fund Grant.

I have a Master of Fine Arts from Virginia Commonwealth University and a Bachelor of Arts in Photography from The George Washington University.

The Aesthetic of Intimacy, curated by Laura Amussen, The Silber Art Gallery, Goucher College, Towson, MD. March to May 2012.