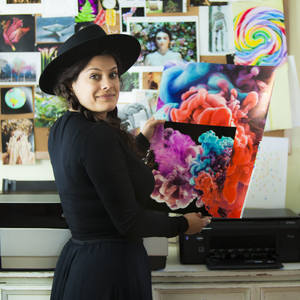 Multi-media artist Javiera Estrada was born in Mexico in 1981 and moved to the United States in 1989. Her childhood was heavily influenced by her training in classical piano and violin, which continues to inspire her aesthetic today. She attended Santa Monica College and received her Certificate of Photography in 2009. Estrada’s broad scope of work is a reflection of memories that she has shaped into her reality. A seeker of the spiritual, Estrada believes that every piece of art created is a self-portrait, a physical expression of that inner nameless world our soul inhabits. Using photography as her main visual medium, the sound of the camera's click offers her the perfect confluence between the real and the ethereal. A multifarious artist, Estrada’s creative expression encompasses traditional photography, mixed media, sculpture, installation, and film.

Estrada has exhibited in galleries in the United States, Europe, and Asia. Her work is part of private and corporate collections internationally. In 2014 she won Art Slant’s Juried Competition, was a 2015 finalist for the Emerging Focus Competition, and is the 2017 winner of the ND Awards Fine Art Category. Estrada made her first short film in 2017 entitled, The Dream, which was selected in Best of Shorts at the Carmel International Film Festival. In 2020, her solo show in Las Vegas was awarded a Certificate of Special Congressional Commendation for the Arts from the United States Congress. Estrada currently lives and works in Los Angeles.