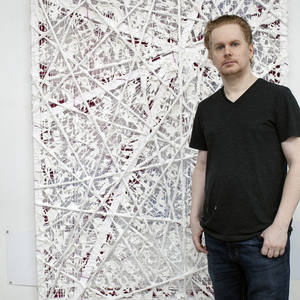 A painter on a long journey from Columbus Ohio, Stopping over in Brooklyn New York, and ending up wherever the future takes me. Been working seriously as a painter since 99 having gone through many facets of my own personal style and keeping coming up with new work to satisfy my craving for creativity.

2019 and 2020 Winner of a Materials Grant from the Greater Columbus Arts Council. YEAH!!!! www.gcac.org

My new Art Diary through Paintings is available at

September 2019: Divisible FS
"This is how the Wind Shifts" A solo exhibition curated by Jeffrey Cortland Jones (pictures included by paintings)

"Materialists" at The Painting Center