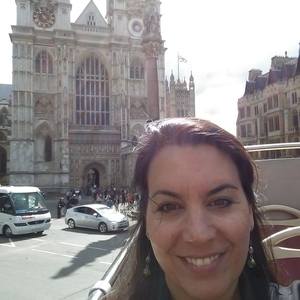 A 4th generation Floridian (although they were all from up North), born in Jacksonville, Florida Lacey moved to Ft. Myers, Florida at age 8. In Ft. Myers, Lacey became a friend of the dolphins, while hoping from island to island on the weekends during boating trips. While at play, she took full advantage of her tropical paradise environment and crabbed in the canal behind her home, built tents with friends in the banana trees and wrote a book in school with classmates about being shipwrecked. Being shipwrecked in a tropical island paradise became the common thread of fantasies that filled her head.

Spending holidays in Jacksonville with her large family, she was inspired by the growth of two relatives as local artists over the years. She was in awe of their talent and held close the memory of watching them work in their amazing studios. Eventually taking a course with and from them years later.

Her high school artwork was acknowledged by being submitted into art shows and winning. During school her art was featured at Nemour’s Hospital, Cummer Art Gallery and UNF’s Gallery Art Show. Her passion for art motivated her to earn a Bachelor of Arts degree at the University of North Florida in Graphic Design.

During college, she took her easy breezy, yacht rock attitude and became President of the UNF Sailing Club. She was the first in years to organize a week long trip to the Marquesas and Dry Tortugas via a 36ft Kat. She draws inspiration for her artwork from her time living in North and South Florida amongst nature.

She continues to enjoy a successful career in digital design and marketing and opened her own business helping other businesses GROW.