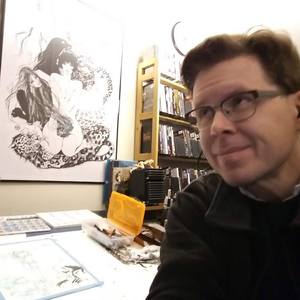 John Linton Roberson has been an independent cartoonist, writer, and illustrator for over 25 years, and has produced 22 publications as Bottomless Studio since 1998.

He is the adapter of Frank Wedekind's Lulu, the creator of Martha, Vladrushka, and Suzy Spreadwell, among others, and the co-creator (with John E. Williams) of Uncle Cyrus. In addition he has also been published by Journey Magazine, Fantagraphics Books, Seven Stories Press and Martian Lit. He is also the editor of the anthology THIS SICKNESS.

Pages from his Lulu were exhibited in Munich's Deutsches Theatremuseum as part of their 2014 Frank Wedekind retrospective. Occasionally he is heard, usually at length, on Tim Young's Deconstructing Comics podcast.

Online you can find him at jlroberson.org.

Pages and other artwork from my version of Wedekind's LULU (the first full adaptation for comics of the plays) were exhibited and included in the exhibition catalog.