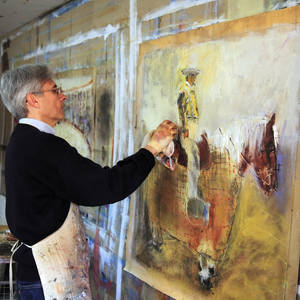 Javier Montesol was born in Barcelona in 1952 and belongs to the Countercultural and Underground movement of the 70s.
​
He began as a comic book artist participating in the creation of new Spanish comic magazines such as Star, Cairo and El Víbora.

In the 80's he became interested in painting and began to sell in a new and revolutionary format, in the Supermercado del Arte, where only once a year, at Christmas, the amateur and collector public could buy at a very good price works by well-known painters and cartoonists.

In 1992, the year of the Barcelona Olympics, he decided to settle in Brittany, France with his wife and 4 young children to devote himself exclusively to painting, exhibiting in Europe and the United States.

In 2012 he returns to comics publishing the graphic novel "SPEAK LOW" and 2017 with the famous Prado Museum, he publishes his comic album "IDILIO".

He teams up with his Agent and Engineer Rocco Ballester to address the new digital era, presence in social networks and digital galleries, participating also in international fairs and private exhibitions.

From this partnership begins the global presence of Javier Montesol, it is a combination of craftsmanship and traditional knowledge of painting with a presence in international markets, social networks and Montesol art as an investment.

You now have the opportunity to participate in the revaluation of Javier Montesol, because it has the tradition of the best Spanish painting and the vision of the future to be present in the new global art markets.

-I entered the Autonomous University of Barcelona in 1969 to study economics, after 2 years I left the university due to the political instability of my country from an ending Dictatorial regime.

-Art self-educated, starting with comics as a teenager being founder of emblematic magazines such as Star and Cairo in Barcelona. Then moved to a full time vocational Artist painter in my 20s.

(GO TO WWW.JAVIERMONTESOL.COM TO SEE THE FULL DETAILS UNTIL TODAY 2021)