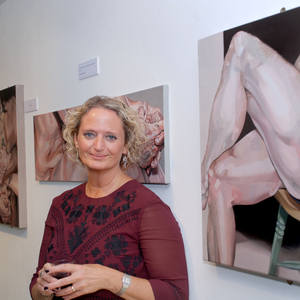 FOR WORKS AVAILABLE TO BUY PLEASE GO TO MY ' AVAILABLE TO BUY' COLLECTION
I have a lot of works for view on this site, some have been sold, a lot have been commissioned - so I have condensed available pieces into this collection - which I hope to update as new work is added or others have sold.

I am based in Cornwall UK.
My work is predominantly figurative.
The wonderful thing about people is that there is no such thing as an 'ordinary' person...Everyone is extraordinary in their own way. I love the quirks and details that make someone stand out from the next person.
I love detail, be it fabrics,patterns, or styles, or blemishes, scars, folds, creases,tones of a nude.
I choose to use oil always, it has a wonderful silky fluidity that suits my work.
I have twice been a finalist in Sky Art Portrait Artist of the Year, with one of my images ( not pretty but pretty honest) being selected to appear over and over in a huge installation of a portrait of The Mona Lisa on Clapham Common, London following series one.

Saltash, A level Art, taught by Vincent Wilson ( one of the Newlyn Sch of artists) - self developed since then.