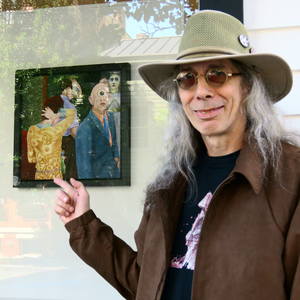 Art is not an end in itself. It is a method of creating awareness of the marvelous. Surrealist art reveals invisible secrets and exposes hidden surprises.

Surrealism is based on a fascination with the strange and imaginary. Surrealist images evoke the possible, supplemented by desire and dream. There are treasures hidden in the human mind, an ability to bathe everyday reality in a magic light. The animal kingdom remains an enigmatic aspect in each of our lives and plays an important role in the symbolism of the unconscious.

Surrealists recognize the illusory nature of rational thought and rebel against it. They hold the mysterious workings of the subconscious in high regard. Reality bows to imagination.

Surrealists set out to reveal the subconscious, to disrupt conscious thought by the use of irrationality and enigma, terror and eroticism.

I am an American born in 1957. My artistic influences include Rene' Magritte, Odilon Redon, Max Ernst, Salvador Dali and Charles Burchfield.

I have studied the martial art of Goshin Ju Jutsu. I study the electric bass (jazz and fusion and funk) and am a comic book reader and collector.

2019 May - Juried Show
"In Honor of Trees"
Brecksville Center of the Arts, Ohio

2018 May - Juried Show
The Gallery at Lakeland, Kirtland, Ohio