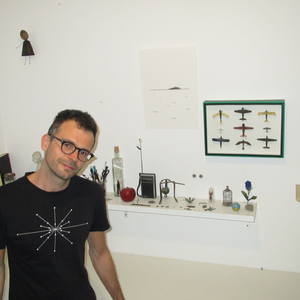 Born in Barcelona, ​​the city where he lives, he obtained the Bachelor of Music diploma at the Koninklijk Conservatorium in The Hague (Netherlands) in the specialty of Jazz-saxophone. Music, always present in his life, has been (and still is) one of the fields where he has developed his creation. Towards 2010, in the face of the need to include a load of ideas in a more concrete way in its creation, a self-taught approach to the world of art begins. Starting almost always from the idea of ​​objet trouve (found object) and from the technique of the assemblage it begins to develop a work of extreme simplicity, bathed by calm waters of the Wabi-sabi where the depth, the sensitivity, the poetry, irony, melancholy, or the ephemeral essence of existence are his DNA.
Jordi Santanach works with objects that he has found and collected over the years, materials of very different types (old wood, rusty veneer, old toys, worn tools ...) but with a common denominator: an unknown history, an uncertain origin, an inaccessible previous life; and it does so with one premise: the non-modification of those; Thus, his pieces are the union of objects as they have been found, neither cut them, nor bend them, nor alter them in any way (only clean and perforate for assembly reasons) and also the union of the times and spaces through which he has been and collected the materials of his creation (lonely beaches, abandoned factories, corners of the city, flea markets ...). A union that seeks to decipher the poetry that is hidden in all the seemingly insignificant that we have around us.