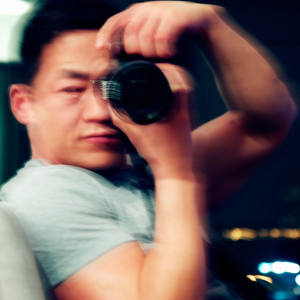 Journey Gong is a Chinese American artist who presents his poetic interpretations of cultural landscapes through photography.

Born and raised in a factory town in Northwestern China, Gong moved to the United States as a young adult. The experience of culture shift has had a great influence on his work. Not only does he appreciate the most celebrated, but also cherishes the often overlooked.

Gong takes special interest in the drama and composition of his photographs, and the visual excitement of light, color and space. Guided by the creative writing process he developed during his academic training, his serialized photographs are concise and rich in emotion. From creating the concept, to finalizing the image selection, he often works on a series for years. Based on a common theme, each image within a series can stand alone as a visual poem, or form a narrative when displayed together.

Gong resides in Berkeley, California, with his husband Marc.

04/2021 The series Viewpoint and 2121 were nominated by Fine Art Photography Awards.

02/2021 The series Viewpoint was nominated by Tokyo International Foto Awards.

10/2020 The series Viewpoint was nominated by ND Awards, and featured on L’Œil de la Photographie, and Dodho Magazine.

04/2020 The series POP was nominated by Fine Art Photography Awards.

04/2019 Two series Abstract and Necessary Errors were nominated by Fine Art Photography Awards in the Fine Art and Conceptual Categories, respectively.
12/2018 Abstract Series was featured on Lost At E Minor.

04/2018 Selected as one of the Editor's Picks by the Independent Photographer Color Photography Award.

02/2018 Conception series was featured on We and the Color, Object Magazine, Mikeshake Magazine, Froot, and Sixth Finch.