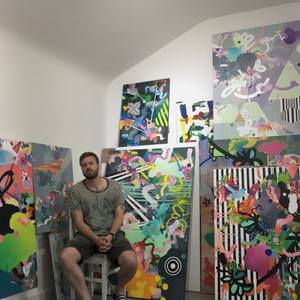 James Tebbutt was born in Northampton, England in 1980.

In 1998 he went to The University of Northampton to study a Foundation Course in Art & Design. After finishing the course James moved on to Coventry University to complete a BA (Hons) in Fine Art, where he specialised in painting.

Since finishing his degree, James has continued to paint, producing a steady stream of work and continually developing his practice whilst taking part in various shows around the country and completing numerous commissions for magazines and private as well as corporate clients.

He works as an Architectural Assistant to pay the bills and paints the rest of the time!

"Like many forms of contemporary music, James paintings appear to be sample based. Not only do visual references appear from a wide range of sources, which include amongst others, cartoons, art historical, news media, design, advertising and consumerism but the method in which these images are portrayed also varies in an attempt to explore the relationship between them. Expressive shapes, marks, colours and other elements are overlaid and contrasted with one another with an ever-increasing dialog between abstraction and figuration. This dialog seems just as important to James as the dialog between the other, more figurative elements. The paintings are created with a kind of stream of consciousness, not only in the choice of imagery and the way in which this imagery is represented but also in the creation of the composition itself. This unplanned, improvised nature in which the paintings are created shares similarities with the methods of abstract expressionism. All in all James paintings are an attempt to reconcile the visual world around him.""James recent work demonstrates his ongoing exploration of the medium of paint. Varying styles of paint application the drip, the splatter, the expressionistically painted, the flat, the cartoon like, the smooth, the rough, all created with different types of paint jostle for a place on the canvas. His work has moved away from the purely abstract and now includes a variety of images taken from many sources magazines, the internet, photographs, news media, art historical- and the resultant paintings, which are not planned through to completion before they are started, develop and evolve with a stream of consciousness linking the component images together in a manner reminiscent of improvised jazz. The resultant paintings can have many narratives and are open to a multitude of possible interpretations."