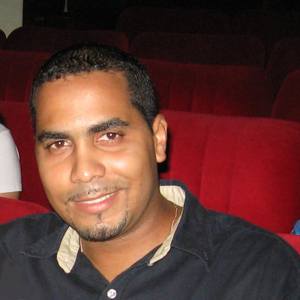 Tony Rodriguez(Juan Antonio Rodriguez Olivares) (b. Santiago de Cuba, Cuba, 1980). Graduated from the Higher Technical Pedagogical Institute of Santiago de Cuba with a Bachelor’s Degree in Education with a concentration in Visual Arts, and receive a Master of Science in Art Education from the University of Oriente in his native Santiago de Cuba. He is a painter, an illustrator, and a curator. He has been called “the painter of reflections”. For many years Tony worked as an art professor. He also was a member of prestigious juries in the context of the visual arts. He has exhibited extensively in Cuba, the USA, and several countries of Latin America like the Dominican Republic, and some European countries. In Tony’s work towers, buildings, machines and other objects can be identified to represent our world, and the humankind history and experience. His drawing and compositions are aggressively executed. Since year 2000, Rodriguez has won several awards. His works have been exhibited in the Havana Biennal and many important galleries in Cuba and Europe. Rodriguez’s works are part of prestigious collections, such as, the Luciano Benetton and the Hispanic Cultural Center in Miami. He currently lives and works in Miami, Florida.