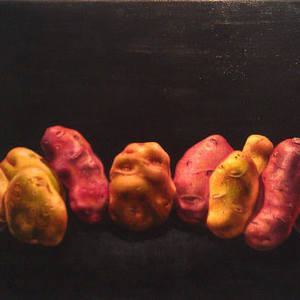 Julian Day completed a B.A in Fine Art at Central St Martin’s College, London, in 1992. He then spent several years in his studio making paintings and completing portrait commissions.

In 1997, Julian was a finalist for the prestigious BP Portrait Award, chosen from thousands of candidates, and was exhibited in the National Portrait Gallery. Periodically, Julian paints West End theatre backdrops with the legendary Mr Andrew Greenfield. Shows that he has painted for include ‘Grease’ and the ‘Royal Variety Show’.

Julian paints with oils and glazes, using a brush, and then wiping the canvas with cloths and fingers to get the white of the primed canvas to come through, in order to create his trademark luminosity – he never uses white paint. The work is then varnished to enhance the brightness of the paint. The result is the incredibly life-like paintings so admired by collectors.