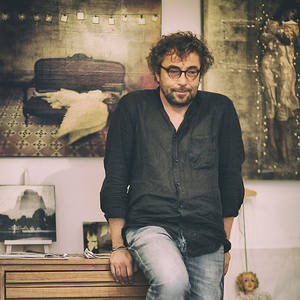 My studio is a tiny storefront, on the main street in small town, in south France. I sit in the back and make my pictures, In front I hang them on the wall and I open the door.
People come in and ask what is it that I am creating. I respond, it’s anything you want it to be. No matter what, you will always view it through the prism of your own experience. ... And so they ask, ... but what is it for you?
I answer, ... I don’t really know. It comes out this way on it’s own. It’s pushing itself through, like ... it needs to be done. I am just an instrument, channelling it down to the paper. To the paper, because it’s too late for me to learn to sculpt or play a violin.
I can say just this little, it’s not about here and now. It’s about collisions of nostalgia, melancholy, of our sepia tinted past and ... yes, ... the future, with the cold, uninspiring present.
I compose my pictures from elements, like a puzzle. I print them to different papers, collage to canvas, wood or other papers. I varnish them, I sandpaper them and varnish them again. I am making objects destined to live, and to be lived with.

February 2012 - Part of the exhibition "DO PROCESS" at VERVE GALLERY OF PHOTOGRAPHY, - Santa Fe, New Mexico

May 2012 - My work is shown at Annenberg Center for Photography in Los Angeles, as part of DIGITAL DARKROOM project