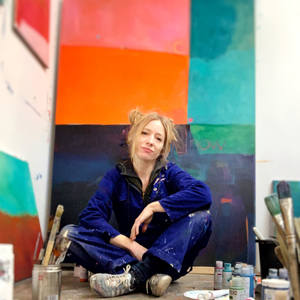 I am a painter and mixed-media artist. I moved to London in 2017 after 10 years developing my practice, showing my work, and living in Italy. My studio is now located in the London N22 arts district.

I make abstract expressionist paintings and mixed media works. Organic shapes, luminous colour and structured compositions are hallmarks of my 'magical realism' works, while intense brushwork and tempestuous land-sea scapes reflect a different aspect of my practice. I have been deeply influenced by growing up in the Western United States and by my time and experience in Italy, as well as by classic modernists’ works and colour theory. Occasionally I take on commissions for large works. I am currently represented by AfterNyne Gallery in Holland Park, London. Previously I was represented by Lamberty Gallery, London and Skylark Galleries, South Bank London.

The Affordable Art Fair - Hampstead, London, 9-12 May 2019 with Skylark Galleries

The Other Art Fair at the Truman Brewery in East London, October 5-8, 2017

The Affordable Art Fair - Hampstead, London, 9-12 May 2019 with Skylark Galleries