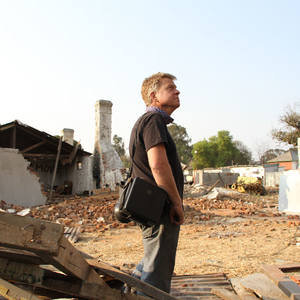 I have been a photographer since leaving school, 5 days after my 18th birthday. I left South Africa in 1964 aged 7 after my father, Rusty Bernstein, had been acquitted at the Rivonia trial.

In 1994 I spent a month as Nelson Mandela's photographer in the weeks leading up to his election as President. I photographed him again in 2005 and 2008. He told me the greatest moment of his life was meeting the Spice Girls. The photographs I was privileged to take of Mandela now form part of a touring exhibition and are currently in Melbourne at the National Library.

My work has been exhibited at the Royal Academy in London in 2017 & 2018, and at the National Portrait Gallery, London in 2017, and has also been exhibited in Paris, Sydney, Johannesburg, Cape Town and New York. Limited edition prints are held in private collections in Los Angeles, Atlanta, New York Hamburg and London.

All of my images are printed on Hahnemühle German Etch 310gsm, a paper with a delicate surface texture. German Etch a traditional mould-made copperplate printing paper, with an inkjet coating designed especially for FineArt applications and is is acid- and lignin-free.
In addition to the image sizes shown, all the images are available printed to a custom size in editions limited to three. For custom sizing please email curator@saatchiart who will liaise with me regarding printing to a specific size.

So here's the thing. As soon as I was old enough to know what a job was - maybe around 12 or 13 - I wanted to be a photographer.
Nothing has changed in the 45 years since.