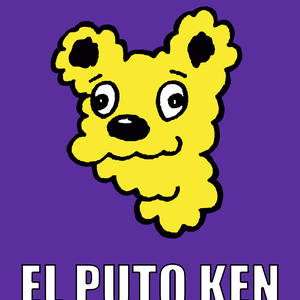 Japanese born multidisciplinary artist lives and works in Barcelona, Spain in his studio in a beautiful apartment in Raval.

The artists background starts in childhood, his father is an artist, his grandfather was a kimono artist using a rare technic called otokojitate.

His father was his mentor and influence, has learned many technics from him and keeps learning and working with him while in Tokyo.

Naturally Ken became an artist firstly studying architecture and design at Academia Arte digital Shinyokohama in 1998. Shortly after graduating he became an architect and worked in the industry for several years.

The artist had bigger plans, while saving money to move to Barcelona to study fine arts and learn Spanish he has worked three jobs while sleeping 3-5 hours a night.

Once in Barcelona the artist started to be known under ‘El Puto Ken’ and his manga influenced works, with a great portfolio of technics and a style that made Risaburo Kimura (Ken’s father master and family friend) jokily say that Ken is his enemy.

His eclectic style evolved through the years and his works can be described as tales fitted in one frame with a tragicomic twist. With a contemporary approach Ken treats themes such as politics, poverty, the day to day life and war. His provocative style won’t leave the viewer impassive.