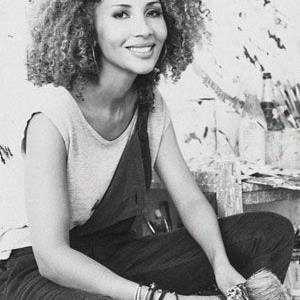 Kristin Kossi is a Germany based contemporary artist.
She began drawing and painting from a very early age, at the same time she also became inspired in fashion and graduated later at the Academy of Fashion Design in Hamburg, Germany.
She then ascertained a great deal of experience in fashion, photography and multimedia, all of which have paved the path for her later artistic endeavour.
Since 2011 she continued working solely as an artist.
Not being one to shy away from a vivid colour palette Kristin Kossi draws inspiration from her urban surroundings like street art, celebrity icons and advertisement in the production of her unique art pieces.The creative skills and knowledge that she has gained from her past experience are quiet integral to her aesthetic process.
Although she favors working large scale with her paintings, she curently produces a smaller sized series by developing and further expanding her unique multi-layered technique and using everything from graffiti stencils, spray paint to newspaper collage, markers, oil, acrylic and resin.
Kristin Kossi intensely combines color, vibrancy, and a generous dose of humor to produce art that inspires, provokes and delights, willing to capture eyes and attention for a long time.
Since she had her first solo show in collaboration with Porsche Hamburg in 2012, she has emerged as an urban pop artist, ready to share her art with the world. Kristin Kossi has been featured in local German publications and TV as an artist to watch. Her works are now in private collections in Europe, US and Australia.