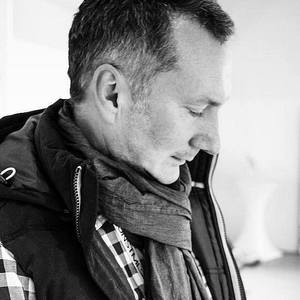 Roger Koenig is an abstract painter who lives and works out of Bauhaus City Dessau. Koenig’s work can be described as ethereal, and attains a level of detail that persuades the viewer to revisit each piece— discovering new secrets each time.

Koenig enjoys utilizing older, and more traditional painting techniques; and as an experienced veteran painter, it’s been some time since he’s analyzed the specifics of his motivation. Koenig’s input medium for his work takes on many forms… antique walls, a nice patina, and aged textures which overlap years of existence fascinate him. These attributes which are naturally attained over time are what Koenig attempts to represent within his work.

Koenig holds a Master’s Degree in painting from HWK Halle in Germany. After completing his work at HWK he studied at the University of Applied Sciences in Magdegurg. Koenig has been working within his trade since 1991, earning his Master’s Certificate three years later. Continuing to push the boundaries of his medium, Koenig’s work on canvas is innovative and highly experimental.

You may view his portfolio on the web at www.rogerkoenig.com and Roger welcomes you to join his community following on Facebook.

Culture and Event Center GaraGe from November 16th until 18th, 2018

In parallel with Art Cologne, the hall of XPOST Köln will be filled with contemporary art from April 20th to 22nd, 2018