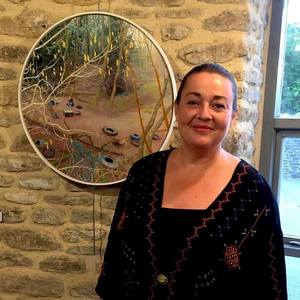 Lara Cobden is a figurative painter living and working in Norfolk. Following a degree in Painting at the University of Brighton, Lara spent 11 years in Ireland before relocating to East Anglia. Her work has been exhibited in the UK and internationally.

'Focusing on memory and sense of place, the paintings are a subjective and individual response to the natural world around me, seeing the fantastical and magical in nature.
I hope there is both a stillness and fluidity in my work; in the ordinary - a sense of reverence.
Paintings evolved from remembered landscapes and casual snapshots, shimmer and shift in and out of focus, both misty and precise. This balance is also contained within the composition of a painting; presence and absence.

The thread pulling this work together is about 'coming home', belonging; or conversely a sense of ' unbelonging'. '

Recently selected for the Society of Women Artists Annual Exhibition, Lara was awarded The Artist Editor’s Choice Award, for work to be used in an article in the Magazine.
This year Lara had a painting pre-selected for the Royal Academy Summer Show.
Last November she had two paintings selected for the ING Discerning Eye curated exhibition - one piece by Dan Coombs and another by Chris Orr RA.
Lara was awarded 1st prize at the Sir John Hurt Art Prize, with her painting Into the Enchanted Garden, in July 2016. She was also selected to exhibit in the 155th Society of Women Artists Annual Open Submission Exhibition in July 2016.
Lara’s painting, ’Alternative Eden’, was selected for the Lynn Painter-Stainers Prize exhibition, at the Mall Galleries in March 2016.
A finalist in the National Open Art Competition, she exhibited in the Finalists ‘Winter’ exhibition at the Royal College of Art, London 21st October - 1st November 2015.
In September 2015 Lara won 1st Prize in the Plein Air painting competition Paint Out Wells and was awarded her first Artist Residency in the Cill Rialaig Project, Co. Kerry in June 2016.