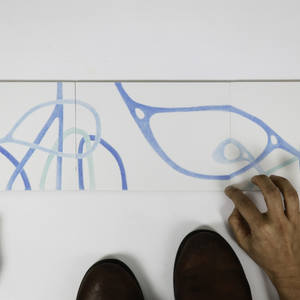 Lava Jafari was born in Tehran, Iran to a family with a strong commitment to the Bahá’í faith; it is this lifelong connection which constructs the fabric of her identity. Lava’s family was forced to flee Iran for fear of religious persecution during the Islamic Revolution of 1979. In her formative years, Lava’s family sought temporary asylum in Greece before being granted permanent asylum in Australia as religious and political refugees.

Lava reveals that her artistic pursuit falls in one of two passions; contemporary and abstraction. The former is fuelled with powerful energy, at times anger and outrage; other times with love and compassion. In this space, she explores social injustice, inequity, prejudice and delves into the common element that connects humanity and spirituality. Contemporary works usually manifest themselves in performance art and installations.

However, most recent works focus on her obsession with abstraction. Here we see Lava fall in love with the abstract; the elements which play on the aesthetic. The recent series ‘Tiles’, utilises an array of materials as a homage to traditional mosaic works of art influenced by her Middle Eastern roots, coupled with the inspiration of modernist colour field abstraction techniques. Tiles unite Lava’s diverse and methodical processes through gouache, graphite and wax pencils on wood to create tonal variation and movement in unique, minimal, yet complex ways.

As a person with dyslexia, Lava embraces the language based on the visual. The line, shape, colour, tone, texture and movement form her conversation. This language brings her peace and happiness in the form of paintings, drawings and paper installations.

Since completing her studies in Visual Arts, Lava has exhibited in galleries throughout the Sydney and Illawarra regions of Australia as both a conceptual and abstract artist. Unfortunately, as a person with severe dyslexia, she has experienced the inaccessible facets of the creative realm. Thankfully, Saatchi Online has been the most usable site to date for her to showcase this portion of her work and, therefore, excited to engage in this visual conversation with both collectors and artists alike.