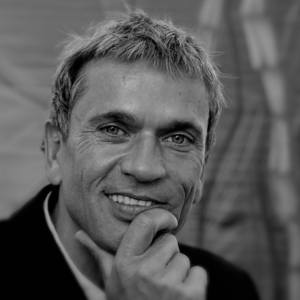 Critically admired Los Angeles based German Artist Hermann Lederle is best known for his 'Pixel' painting and more recent 'Adaptation' series. Upon graduating from Karl Friedrich School Mannheim for humanist and classic studies in Germany, Lederle re-directed his career path. His early apprenticeship training in photography inspired him to seek a formal continued education in the Fine Arts, namely filmmaking and painting at the San Francisco Art Institute.
San Francisco became his new residency for the next years until graduating with a BFA, followed by five years establishing himself as a painter in the thriving arts district of Tribeca in downtown New York City. It was there, Lederle began to formulate his own visual language to express his concepts and ideas through the lens, on canvas and on the film screen.
Exemplifying the artist’s interest in the interaction between art and film and creating an additional link to 21st century web based digital art, Lederle's painting strives to wipe clean the slate of conventional notions of image construction.
Lederle's 'Pixel' series, first shown at Media Rare Gallery in Hollywood suggests a kind of Cubism for the digital age. His work as a filmmaker cross-pollinates in subtle, oblique ways. The idea of pixel paintings originated when working with digital images. “It was a discovery. We may have been seeing this way unconsciously since human beings had eyes, but now that we know we can zoom in on something, and then zoom out and see the whole picture, it becomes an awareness we can use to appreciate the pixilated version. Kind of like a primal, pre-conscious experience that relates to the era of technology."
Lederle's 'Footprints On Snow' series entails a two stage process, where a graduated color is applied with a tractional brush allowing for the distinct qualities of its stroke to emerge. The second stage is executed with a painter's knife often with ostensibly contradictory linear shapes and lines, imbuing it with the properties of rival perceptions, irreversible like footprints, taking place within the canvases.
More recently, in his so-called 'Adaptation' series, those vertical bands consist of the vivid and expressionistic decades-old paintings that Lederle has painstakingly hand-cut and then collaged onto the canvas, leaving just enough space for original marks to show through as interstices of the canvas. Punctuated with a stop and go rhythm, the work reigns in the artist’s prior unbidden flourishes and lays bare the source of artistic inspiration, simultaneously suggesting themes of evolution as they relate to Lederle's own practice and reflections on art history.
Hermann Lederle's work has been widely exhibited in the United States in New York, Los Angeles, San Francisco and Germany, Canada, Hungary and France. A significant body of his work is in consignment at galleries, including DSV Kunstkontor Stuttgart, HPH Siebdruck Echterdingen, Media Rare Gallery Los Angeles, Court Gallery New York, Lawson Galleries San Francisco, Friedman Guinness Gallery Heidelberg, and in private collections of Ringo Starr, Eric Stolz, Cal Zecca, Gabor Csupo.
Lederle lives and works in Los Angeles, California.