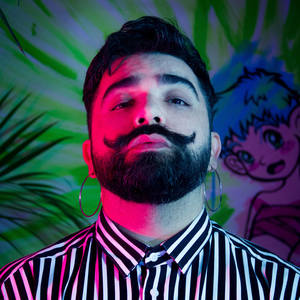 Leho was born on November 2, 1979 in Montevideo, Uruguay.

He is a visual artist and activist immersed in Queer Art and what he call as "Latin American J-pop”, experimenting with painting, digital art, sculpture and video art.

His work reflects a commitment to human rights focused on the visibility of "other childhoods and teens."

Since 2004 he has developed a career in national and international markets as an art director in film and cinema advertising. His experience led him to start directing advertising pieces in 2009.

2018: Semana de Arte Trans (Trans Art Week Festival) The SAT 2018 is an international art festival, organized by the Secretary of Diversity of the Municipality of Montevideo, which aims to make visible to trans people and non-heteronormative views on them from a different place than expected: as subjects of the human right to culture. Leho De Sosa was selected as Artistic Coordinator and had the responsibility to develop an agenda and proposals that included artists from Mexico, Argentina, Brazil, Germany

2018: Integral Law for Trans People National Campaign. Responsible for all the graphic and visual image, as an activist, communicator and artist is part of an honorary way in the Communication, dissemination and press commission. The campaign promoted for the approval of the law that seeks a substantial change in the quality of life of trans people in Uruguay.

2018: Montevideo Comics. Participation in the table of national cartoonists and presentation of the graphic novel TeenTrans "Heroes without secret identity" in the Comics Convention, Animation and Video Games of Uruguay.

2018: Microutopías "Printed Art Fair", Cultural Center of Spain, Montevideo - Uruguay "Production is understood as a generation of micro-clusters, valuing the action of publishing, as well as a creative act, as a reflective exercise / graphic activism" Leho is summoned as an exhibitor during the three days of the festival, as well as participating in the presentations in the PechaKucha 20x20 format.

2017: Invited to participate in the Outburst Queer Art Festival 2017 by the British Council, Belfast, Northern Ireland.

2017: Manga Book | Teen Trans, Superheros without a secret identity - Graphic novel entirely created by Leho and published by Secretary of Diversity, IM |Government of the City of Montevideo.

2017: Bienvenidxs Todxs|Wellcome everyone - Creation and Direction, project of the Inter-American Institute of Human Rights and IM funded by the Embassy of Canada in Uruguay.