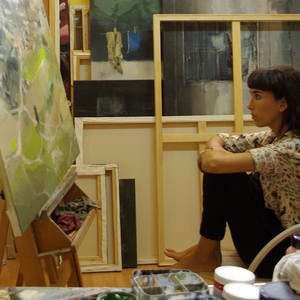 My relationship with painting has much to do with emotion; to paint something I need a motivation that originates from the object I want to represent. I focus mainly on projecting my interest in other disciplines such as drawing or photography. I am not concerned with copying the model, I interpret what I see and reinforce plastic values to achieve what I consider important, the ability to excite. My work explores contemporary urban environment, using a figuration that places special emphasis on the use of pictorial resources, light, composition and colour. I'm currently thinking about a surprisement of space through the introduction of foreign elements, sometimes through words or phrases that replace modules or advertising posters, sometimes playing with strange or paradoxical elements. It is something subtle that requires a closer gaze and introduces a point of ambiguity - it makes you wonder whether it was there originally. These are words or things that perhaps are out of context generating uncertainty.

To the date I have combined my studies with paint. I am currently finishing my dissertation in the University of the Basque Country, UPV / EHU;
and collaborating in a research group.

Awards
I have received several awards and distinctions in painting, illustration, photography, comics and projects. I have received several awards and distinctions in painting, illustration, photography, comics and projects. This year, 2017, I can highlight the acquisitions in the “XLIX Concurso de Pintura y Dibujo “Ciudad de Tomelloso”, in the “XXXV Certamen Nacional de Artes Plásticas Castillo de San Fernando” and in the “VIII Bienal de Pintura y Escultura Deportiva”, Burgos. I also won the 1º price in the “XLVIII Premios Ciudad de Alcalá Artes Visuales”, 1º price in the “LXXIV Concurso Internacional de Arte José Camarón”, 3rd price in the “VIII Premio Internacional de Arte sobre papel Fundación Barcelona Olímpica”, 3º price in the “VII Certamen de Arte Hotel Carlton” and a medal of Honor in the “XXVI Premio Nacional Lopez Villaseñor de Artes Plásticas” (2017). I was selected to participate in the “XIX Bienal de Arte de Cerveira”, Portugal and at the “Arte no Morrazo” Biennial in Galicia. On the other hand, I have been finalist in the “VIII Certamen de Pintura Laura Otero”, in the “V Certamen de Pintura Camarote Madrid”, in the “XVI Premio de Pintura Miquel Viladrich” and in the “Concurso Nacional de Pintura “Miguel González Sandoval” of Lora del Río.
In 2016 I have won the first price in the “XXIII Concurso Nacional de Pintura Ciudad de Medina de Pomar” and some others, like the second price in the “X Premio Eduardo Ruiz-Golluri”. I also have been finalist in the “VII Premio Fundació Barcelona Olímpica”.
In 2015 I can underline the creation grant awarded by the Provincial Council of Bizkaia, and the 1st Prize at the XXIII national art contest Art Nalón. I have also been selected in the IX Certamen de Pintura Parlamento de La Rioja, in the International Competition of the XVIII Bienal of Cerveira, in the 1st Artwork calling Arteuparte show, in Tabakalera and pre-selected in Figurativas 2015.
In 2014 I can highlight the selections of Ertibil, organized by the Provincial Council of Bizkaia and the C.C. Montehermoso. I have also received a special mention in the national art contest Art Nalón and I have been selected in the contest Carsarte and the painting prize Paco Merino.
Between 2003 and 2015 I won different awards in over 100 outdoors painting contests, including first prizes in Donostia in the contest "Primavera en la Plaza Gipuzkoa" (2014), Bueño (2014), Leioa (2014, 2013), Portugalete (2014), Camargo (2013), Avilés (2013) or Santoña (2011). And the second in the competition of Pamplona (2015), Goya in Bilbao (2013), "Zipristin" in Donostia (2012) or "May Day" (2010, 2011), organized by historical cafes of Bilbao. Furthermore, in 2009 I got an award that funded an intervention project for "Jet Lag Bio 09", festival of young urban expressions organized by the city council of Bilbao. A work painted for this project is now heritage of EHU / UPV University of the Basque Country and is permanently exposed in the lobby of Laboral Relations. In 2008 I was selected in the international contest: "II Premio de Fotografía Digital Ayuntamiento de Santander-Foconorte". In 2007 I turned semifinalist in digital photography category in the "Adobe Design Achievement Awards", San Francisco, USA (international contest with two selected nationally).

In 2017 I had an individual exhibition in the Historical Museum of Merindades in Medina de Pomar and I am taking part at the XIX Biennial of Art of Cerveira, Portugal. In 2016 I have been invited to participate in NordArt, contemporary art fair in Germany where my work can be seen currently. I have exhibited individually in La Vidriera, in Camargo and in the museum Eduardo Úrculo in Asturias. I have also participated in group exhibitions at the Museum Fernando Soria, Alicante (honourable mention at the III Premio de Pintura Fernando Soria), in the Museu Olimpic i de l'Esport Joan Antoni Samaranch of Barcelona (Finalist in the VII Premio Fundació Barcelona Olímpica ·Art sobre paper) and in Octogono Gallery in Aviles. In 2015 I made a solo exhibition in at the Juan de Lizarazu galery in Urretxu. I have also exhibited at the "XVIII Bienal of Cerveira" in Portugal , Octogono Gallery in Aviles, in the Parliament of La Rioja and as finalist of "II Artevistas Award for New Talent" in Artevistas Gallery in Barcelona. Last year, 2014, I exposed in Octogono Gallery in Avilés, under an initiative of MAV and in the C.C. Montehermoso in Vitoria, in a show titled "Ampliación del campo de batalla" . I have also shown my work in over 100 group exhibitions, mainly in Spain, but also in Portugal, Italy, Serbia and USA. For example, in 2014 I was selected in Ertibil and one of my paintings have been exhibited in Sala Rekalde in Bilbao. I have also been selected in Carsarte 2014 and my work will be part of a traveling exhibition. In 2012 and 2013 I was selected in the "Certamen de pintura Hotel Carlton" and my work could be seen in the exhibition of the event. In 2010 I participated as a speaker and as an artist in the exhibition "Imágenes en tensión: sobre la ausencia y la presencia del cuerpo en las problemáticas de género", organized by the EHU / UPV . In 2009 I was part of an illustration exhibition organized by CLONE graphix in Naves del Barranco and in Montana Shop & Gallery, Sevilla. My works were also included in the sample "Becarios de tercer ciclo" in Sala Áraba, Vitoria. In 2008 I won a photography prize "Nuestro concurso, nuestro futuro, nuestro derecho", taking part in a digital art exhibition at the Centro Cívico de La Bolsa, in Bilbao. Also, I was selected for "INK 01. Encuentro internacional de ilustración" whith works projection in Bilbao Arte . Last year a series of photographs were presented in San Francisco, USA, under the "Adobe Design Achievement Awards", and the "World Biennial of Student Photography Exhibition 2007 Novi Sad" in Serbia. In 2004 my work was exhibited at the Accademia di Belle Arti in Ravenna, Italy.

WORK IN INSTITUTIONS AND COLLECTIONS

My work is in the museum “Antonio López Torres” in Tomelloso, the museum “Eduardo Úrculo” in Asturias, the museum “Olímpic i de l’Esport Joan Antoni Samaranch” in Barcelona, in the Regional Government of Bizkaia, in the Regional Government of Burgos, in the city council of Segorbe, Alcalá de Henares and Bolaños de Calatrava, in the EHU / UPV University of the Basque Country, in the private collection and the Glass Pavilion of Mercedes de Miguel, in Santa Cecilia academy of art (Cádiz), in The Museum of Artistic Reproductions of Bilbao, in the collections of Begoña Ezenarro Tax Adviser (Bilbao), in Bilbao Centro (commercial Association of businesses, service, culture and leisure in Bilbao), in the Historic Cafes of Bilbao, in the Caja Rural of Navarra, in the CESAC, Zaragoza, in Gullón in Palencia, in the Commonwealth of Pamplona, in La Colmena (Asturias), in the Stationery Tamayo in Donostia, in the Costa Dorada New Restaurant in London, in Topaleku in Bilbao and in several private collections in Spain, United States, Germany, France and Portugal. I also have paintings in more than 50 city councils in Spain.