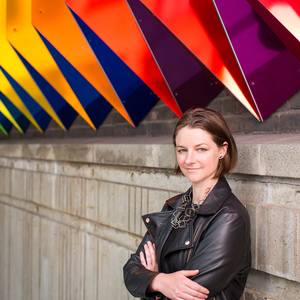 Liz West is a British artist (b.1985) who graduated from Glasgow School of Art in 2007. West’s broad body of work encompasses wall-based artwork, sculpture, and site-specific installations.

West creates vivid environments that mix luminous colour and radiant light. West aims to provoke a heightened sensory awareness in the viewer through her works. She is interested in exploring how sensory phenomena can invoke psychological and physical responses that tap into our own deeply entrenched relationships to colour. West's investigation into the relationship between colour and light is often realised through an engagement between materiality and a given site. Our understanding of colour can only be realised through the presence of light. By playing and adjusting colour, West brings out the intensity and composition of her spatial arrangements.