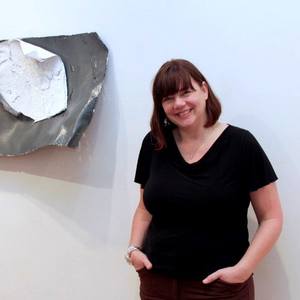 ​​As a contemporary painter, I am tied to the history of painting and the formal language that has defined it for centuries, and yet my work communicates change and evolution. In one sense, I feel there is no better time than now to challenge notions and ideologies that no longer prevail in art making. However, there is still a part of me that hangs on to the tradition of painting, as if it is an embedded safe-guard that draws me back in case I stray too far into ‘unknown territory’. When I first began to notice that my work was progressing away from the wall and into my own sphere, no inhibitions held me back. I allowed the work to move in whatever direction it was taking me, and did not stop to question or analyze the intent. However, as I was a student at the time, I needed to explain my motivation for making paintings in this way.

Having learned the ‘process’ of thoughtful intention, and reasoning out the choices definitively and coherently to my peers, I broke it down to a level of understanding. What began simply as a raw response to the paint, manifested into a clearly conceived plan written down like a manifesto. In fact, I had this new process so defined that I knew in my third year how my practice would unfold from that point forward. Yet now as I work in my studio, I am still analyzing the why and how of this work which is often a hindrance to creativity. Since the process I use in creating my 3-dimensional paintings does not fit into any paradigm or notion of painting, I am very much in ‘unknown territory’.

The urge to find answers to problems by returning to the old notions of painting, is the very thing I wish to be free of. It is this hidden tie to the past, and the safety-net of systems that is now the biggest challenge I face in my current practice. My work has a loud voice and proclaims to negate the rectangle, the wall and invites the viewer to engage with it from every perspective. Yet, it is within these accepted ideologies that I look for answers when I have yet to create the questions. The process of dissecting these ties will open up endless possibilities in my current work and over all practice.