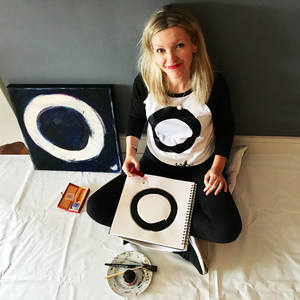 Lou Hamilton is an artist, multi-award-winning filmmaker & podcaster. She makes abstract paintings, which aim to help create quiet, meditative spaces to live and work. Concerned mainly with the abstract & working with found materials, oils, inks, plaster & acrylic, Lou is currently exploring chaos & calm through simple textures inspired by the landscape. Whether on paper, textile or canvas, they give a lens through which to view the world, a moment to stop, pause & consider

Lou’s grand-father was the figurative painter Geoffrey Tibble 1909-1952. He was one of the distinguished & influential group of artists that emerged from the Slade at the of the 1920’s and was a member of the Euston Road School of Painters. His work can be seen at the Tate, and is in many collections around the world. In 1933 he with William Coldstream, Victor Pasmore & Rodrigo Moynihan founded the Objective Abstraction movement. It was short-lived but Lou has taken up the mantel through her work.

Lou grew up in the wild, open and ancient landscape of Wiltshire, and every year since childhood has spent summers amongst the scorched, saturated colours of South of France. For five years she lived and painted in the Lake District, Cumbria and South West Scotland. Now she has settled on an Island in London, surrounded by water, glass-clad buildings, and graffiti covered walls and textured, peeling surfaces. The light, texture & colours are an ever-changing source of inspiration. Her studio faces the same view that Turner painted, an influence not lost on her.

Lou’s paintings are inspired by landmass, aerial views, microscopic, energetic reflections of water, light, flags & urban textures. They might appear as simple bands of colour, in a 3-act structure, that bely the depth of surface, or scratched sgraffito layered works that allow the colours & underpainting to show through the cracks & broken surface. She uses oil pastels and scrapers to make marks & lines trailing across the surface. Working first with vigorous, energetic textural strokes in acrylic, then manipulating the surface with veils of acrylics or oils mixed with organic walnut oil, medium & sometimes plaster, she builds up layers until they start to resonate and ‘hum’. At that point she knows she’s hit the sweet spot. Her aim is to create a deep expression of landmass or city scars or aerial mapping at an elemental level.

She is also the author & creator of the book of illustrations “Brave New Girl” & the self-coaching book FEAR LESS both published by Orion Spring.