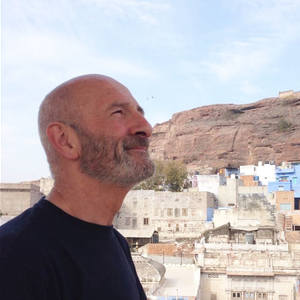 I work in the still life painting tradition and grow my paintings from brief, often precarious, arrangements of small, neutral or insignificant subject matter, using observation, intuition, relationship, scale and metaphor to create a sense of clarity and space and give form to my sensibility. I regard form as concentrated space, process and phenomena and strive to create visual meditations that are layered, poetic and stop time. I draw on my interests outside art for inspiration - mainly music, yoga, meditation and Eastern thought, mainly Tao and Zen. I am particularly drawn to the increasing connections between Buddhist related thought and aspects of contemporary science, particularly physics and neuropsychology.
I have also been very influenced by Iain McGilchrist's groundbreaking book "The Master and his Emissary", a Rosetta stone that connects the two brain hemispheres, "the two cultures" and the philosophies of East and West. It reveals much of arts response to 20th/21st century Western society to be in fact, like its subject, Cartesian and dualistic.

Please look at my blog for more written thoughts and observations.
My work can be viewed by year via the Collections/view all/ tab

Videos
a short (new) video in which I talk about what it means to be a painter, how I arrived at my subject matter and the connectedness of painting. Beautifully filmed, edited and scored by my son Jack @mcpartland.studio
https://www.youtube.com/watch?v=N_8xusLlYCg


A short film in which I talk about my work.
https://www.youtube.com/watch?v=pzKnk7lYc-s

My partner Stephanie Tuckwell and I exploring the Llyn Peninsula, Wales. Produced for Wales Tourist Board.
https://www.youtube.com/watch?v=eSHcLgOB8P0