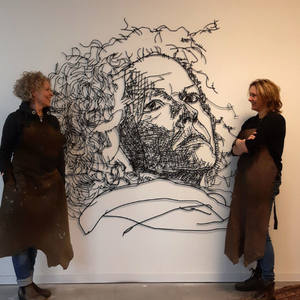 ‘Why being creative works best when working together - The power of two.’
There they are, in their studio, covered by aprons and welding jackets, welding masks, welder’s goggles and earmuffs, bending over steel.

Particles of dust and sparks of light everywhere. The cold, hard, raw and rigid material is being transformed into a form, a sculpture. When ready it’s not just a sculpture hanging on the wall.

It comes towards you, supported by the ever-changing play of shadow and light.
Here they are creating, thinking, discussing, adjusting, cursing, sawing, laughing, welding and wondering. Their sense of humour is ever-present.

Small pieces of steel get connected to become a story, a figure, a sculpture, a portrait. Sometimes commissioned, sometimes free form.

For them, every work is a new opportunity to rediscover the material, to find new techniques and different angles. Always exploring new possibilities, based on not knowing, never playing safe.

Ien Sluyters (1973) and Marjon Deul (1966) are artist duo Mainkunstenaars. Both educated at the Art Academy in Arendonk (Belgium). During their education they learned that there is power in their collaboration and partnership. They discovered the power of the pair. They create sculptures (of steel or clay) and assembled art. Their work is displayed in several galleries.

Commissioned by Airco Caravan, they created a little statue of Martin Luther King. This statue was presented to different organisations and people who have put slavery firmly on the international agenda.

At this moment, the statue can be viewed in the National Civil Rights Museum at Lorraine Motel (where King was murdered), the Studio Museum Harlem and the Nobel Museum Stockholm. In Amsterdam there is a statue at the Mauritshuis, Tropenmuseum, Martin Luther King Park, Amsterdam museum, VU University and the Mayor’s Residence.

Besides feeling honoured and appreciated being asked to create this statue, it’s an expression of their social and cultural involvement. It shows how much it’s entangled in their life and work and it goes beyond their niche and clients.