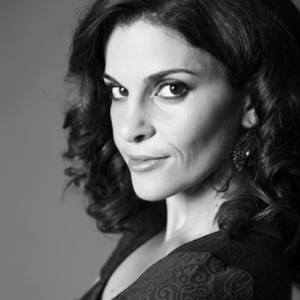 Joumana Medlej uses the word as image to evoke mystery. Unburdened by iconography, her art bypasses the mind to speak directly to the heart. The pieces refer the viewer not to the world of forms but to a cosmic order; their architectural quality generates a space in which the observer is held in contemplation and stillness.

A key component of the work is the use of script, hidden in plain sight: Medlej’s visual language is based on Kufic, the first great Arabic script, now largely forgotten. She received the essence of Kufic while working with master calligrapher Samir Sayegh, and went on to gain a deeper understanding of it through her own practice and research. The stylized, repeated words that make up each art piece endow it with the script’s intrinsic qualities—an inner consonance of shapes and proportions that reflects classical teachings on Beauty—making each of them a self-contained whole, a world with its own natural laws.

Materials and techniques vary: acrylic, watercolour or even egg tempera, on paper, wood or metal surfaces. Medlej calls on the full intensity of colour. She rarely uses paint from the tube, instead mixing the raw pigments to tailor their interaction with light: from bottomless mattes, to surfaces shimmering with an inner glow and ever-changing iridescent lustres. Similarly, she works with shadows, creating and casting them by layering or folding. The ultimate expression of this quest for depth and unmediated experience are her wall sculptures, which break free from any framing device to grow straight out of the wall—and, on a different scale, her artist books which can be held, touched and experienced in a personal, intimate way.

Medlej’s current subject matter of choice is medieval cosmology, particularly the intersection of the Sufi world view with science.

Diploma in Traditional Arts (Islamic Manuscript Illumination, Alchemy of Paint, Geometry and World Art, Icon Painting of the Prosopon School, Art of Egg Painting and Gilding) from the Prince’s School of Traditional Arts, 2013